Two systems in one.

Also known as a tunnel gantry, the ID3T washing gantry is a system which combines a 'standard' automatic washing gantry which washes when the coach is stationary and a washing tunnel system where the vehicle passes through the machine which is fixed in place.
The major goal is to achieve the same washing quality whilst also achieving a washing time closer to that of a tunnel.

Cost reduction on all levels.

In the same way, the ID3T is designed to be installed easily as a replacement for a traditional vehicle wash tunnel on the same washing platform. 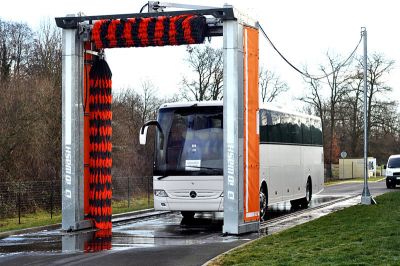